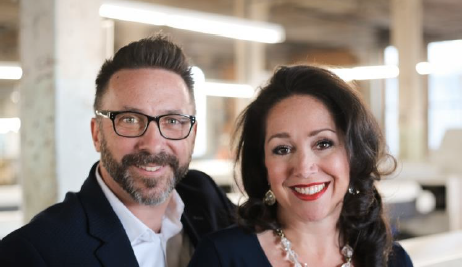 CONCORD, NH – Walter H. Bagshaw, was born in Derbyshire, England in 1847, the fifth in a family of ten children. He went to work at T.R. Harding in Leeds, England, manufacturing comb pins at age 9 and moved to America in his teens. In 1870 at the age of 23, he established the W.H. Bagshaw Company as a pin comb manufacturer on Howe Street in Lowell, MA. It remained there until 1950 when the company moved to their current location in Nashua after Textron Mills vacated. From their early days, they grew to be recognized as a major domestic and international supplier of all types of pins, pin assemblies and wire products. In fact, they’re the oldest pin makers in America. Today, they are led by Aaron and Adria Bagshaw, the 5th generation of Bagshaw family management and have been selected as New Hampshire’s winner of the 2018 Jeffrey Butland Family Owned Small Business Award.

They were nominated for the award by Ms. Hollis McGuire, Nashua Regional Director of the New Hampshire Small Business Development Center who stated, “This is a family owned business that has successfully transferred to a 5 th generation of Bagshaws. Although manufacturers have closed in high numbers in New England over the past decade, W.H. Bagshaw has continued to adapt to change, using state of the art machinery and processes to remain competitive and open the door to new products and markets.”

With the same entrepreneurial spirit of their founding father, the company has evolved its processes and products over the decades. When Aaron started working in the family business in the late 1990’s, he knew that continual change would be necessary for the business to survive for another generation. Adria joined him in the business in 2004, and they began to recognize the vast resources within the state that would be instrumental in positioning the company for growth. The NH Small Business Development Center advising played a key role several key times over the past decade. Adria was so appreciative of the work by the NHSBDC that she joined their Advisory Board in 2010 and has served as Chair for the last 6 years.

Today, the W.H. Bagshaw Company employs 41 employees, many with long tenure and broad experience. The company continues to be known for their quality products and for their heritage, but also their ability to embrace change. While they are guided by the founding principles of their forefathers, the current leaders Aaron and Adria Bagshaw take well deserved pride in their ability to integrate both century old and current manufacturing processes. They are the first to point out that their success is due to their diversity – both of their workforce and their markets served.

They have made two acquisitions in the past two years, integrating both new machinery and displaced employees in their operations. Over the years, they have expanded their markets and now export products to 11 countries serving the Medical, Aerospace, Defense, and High Tech industries. Guests visiting the factory step back in time, learning about the phonograph needles that kept the factory booming early last century, and then jump forward to see the state of the art equipment. While they still produce simple pins like textile pins, dart points, and hinge pins with decades old technology, close to 30 CNC machines are now manufacturing parts for very modern uses such as roller bearings, Teflon insulators, housings, valve bodies and plungers. With their investment in CNC equipment and training for workers, they are able to manufacture to exact specifications and precise tolerances, and embody lean principles to improve their competitive position in the marketplace. Aaron and Adria are also committed to continuously improving the culture and workplace, as “Family” has always been a priority. They offer a generous paid time off policy and have every other Friday “off”.

In announcing W.H. Bagshaw as the 2018 Butland Small Family Business Award, Greta Johansson, District Director for the New Hampshire SBA office said “To say the Bagshaw Family has a rich history and commitment to manufacturing is truly an understatement. They also have a 148 year story of commitment to making quality products that merit their name. Their adaptation to change was not without risk and sacrifice but today they are poised to look further into the future than Walter could ever have dreamed in 1870. “

Aaron and Adria Bagshaw will be recognized locally at the annual NH SBA Small Business Awards event on May 2nd at the Manchester Country Club in Bedford.